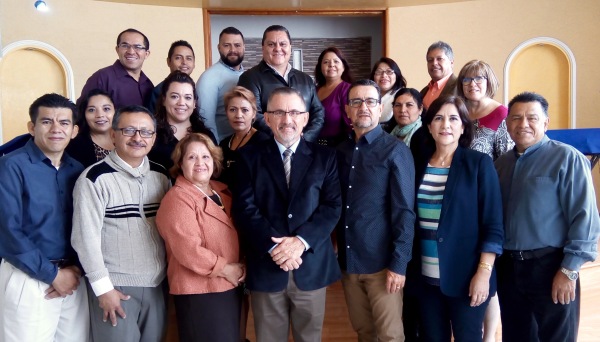 Paul Kazim was born and raised in a nominally Muslim family in New York City. He was the first in his family to come to Christ, when he met God in His word, just as he finished High School. He studied Chemistry at Queens College of the City of New York, before spending three years on staff with InterVarsity Christian Fellowship on the East Coast. He later received his M.Div from Gordon Conwell Theological Seminary, in Boston. He earned a Ph.D. in Intercultural Studies at the Assemblies of God Theological Seminary in 2017.

Sandy (formerly Woodworth) was born in Santa Clara de las Villas, Cuba, and was raised by two giants in the faith, who themselves served in Latin America for all of Sandy’s childhood. She has a bachelor’s degree in nursing and a master’s degree in family medicine.

Paul and Sandy married in 1987. Both are ordained AG ministers, with credentials from the Southern California Network. The Kazims have been with Assemblies of God World Missions in Latin America for the past 25 years, first in Peru, and in Mexico since 2000.

Recently, Paul resigned as the Mexico field’s Area Director after eight years in order to dedicate more time to his teaching ministry. He is involved in pastoral education in local Bible institutes, and bachelor’s (ISUM) and master’s (Facultad) level TEE (Theological Education by Extension) programs. His goal is to develop hermeneutical communities with a wide variety of experiences and backgrounds which will produce indigenous reflections on the Scriptures.

The bulk of Sandy’s time is spent discipling Mexican health care providers to participate in medical outreaches to new and developing churches, and be self-sustaining and self-propagating. She helps organize and carry out several medical outreaches each year, particularly to isolated or disaster-impacted areas. Sandy also teaches on issues regarding identity, family dynamics, and the prevention of sexual abuse, and helps coordinate pastoral counseling seminars on these topics for church leaders.

Paul and Sandy have three adult children who grew up on the field with them. Hannah, Stephen, Stephen’s terrific wife Emily, and Andrew now live in Long Beach, CA.

Paul and Sandy love living in Mexico City, and getting to enjoy its vibrant culture, food, and community. They can’t wait to get back, and pick up where they left off!